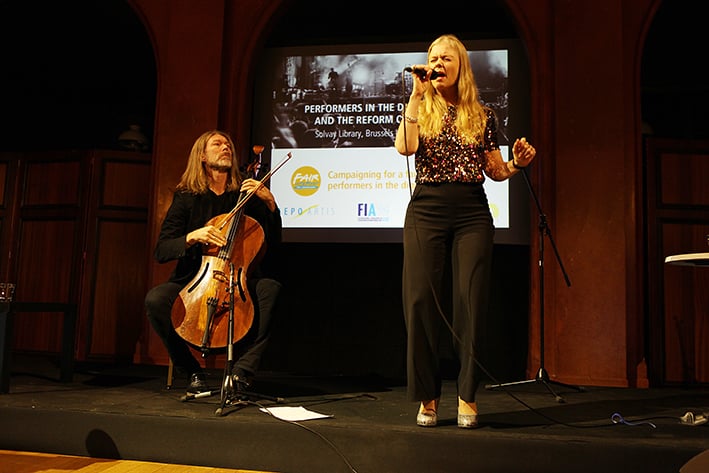 5 December 2016, Brussels: Key representatives of the FAIR INTERNET campaign, which represent over 500,000 musicians, singers, actors and dancers in Europe, gathered today for their yearly event in Brussels to take stock of the Commission’s draft Directive on Copyright with European Commission officials, Members of the European Parliament and Member States’ representatives.

The fair remuneration of performers from on-demand services (iTunes, Netflix, Spotify, …) was at the heart of the discussion with unanimous support from performers for the European Parliament and Member States to make key changes to the current draft Directive.
Xavier Blanc, Secretary General of AEPO-ARTIS, partner of the FAIR INTERNET campaign said:

“The European Parliament and Member States have a once in a life time opportunity to ensure hundred thousands of performers across Europe receive a fair share from on demand services. If unchanged, most performers in Europe will continue to be excluded from a thriving digital market receiving merely a symbolic fee for all types of exploitation of their performances and no additional payment for making their work available for on-demand services”.

“Actors do work a lot in the limelight but it is often forgotten that, throughout their career, they face a very uncertain professional future. I am here in Brussels to express my support to the Fair Internet Campaign and to call on European legislators to honour their political commitments by ensuring that all actors can make a decent living from their work. We need EU law to also include a statutory right to be remunerated for the streaming/downloading of performances, which would guarantee that actors like me are treated fairly in the digital environment”.

“Musicians, singers, actors, dancers, … are at the heart of creation. With more and more on-demand services being developed, performers, like me, rely on their rights to earn a living. Sadly, most of us do not get a fair share for the actual use of our performances via download and streaming services. European legislators have been sympathetic to the cause of artists. They now need to translate their words into action and introduce in the draft Directive on Copyright a right to remuneration for performers payable by on demand services and collected by performers’ collective management organisations”.

Following the adoption in September 2016 of the draft Directive on Copyright by the European Commission, the European Parliament and Council of the European Union are now working to amend the current draft proposal.

The FAIR INTERNET coalition calls on the European Parliament and Member States to ensure that performers receive a fair share of online revenues, through an unwaivable remuneration right for digital uses of their work, collected from digital platforms such as iTunes, Netflix, Spotify, etc which make the performances available on demand and subject to mandatory collective management.

The FAIR INTERNET coalition calls on the European Commission to reconsider its current position and its weak proposals contained in the draft Directive on Copyright in the Digital Single Market which does not strengthen European culture.